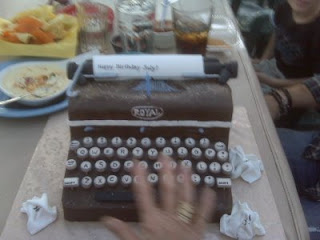 I was invited out to a birthday dinner Sunday night in Old Town Scottsdale for the editor of the magazine that I write for and a few industry friends and family. This had to be the most amazing birthday cake I have ever seen and I have seen several hundred wedding cakes and birthday cakes in 30 years of DJ work. It was a shame to cut this one up and eat it. Each of the keys were on toothpicks and they were all in order just like they would be on an old-school typewriter. The paper was made of sugar and draped over the back of the cake. You can see some wadded up sugar paper there around the base of the cake. The photo is a bit blurry because it was really bright out in the courtyard as the sun was setting and it was hard to see the screen on the camera phone that was being used, but if you can focus on the paper, the typewriter is typing "Happy Birthday, Judy!" About half of the restaurant had to get out of their chairs and come and inspect and ooh and ahh and then give their anonymous good wishes.

I think Judy probably has everything you could ever want in life. I knew that I couldn't impress her with even the most rare trinket of wonder and since she lives dually in both Arizona and Kentucky, I was sure she didn't need to travel with another gift, but I knew that she wouldn't have a guy with a guitar serenading her so I took a couple of hours and learned the Beatles "When I'm 64" because she had spilled the beans on that particular secret but you'd never know looking at her...

Between the appetizer and the main course, there was a slow spot and I decided that this time was as good as any other so I whipped out the guitar and started singing... "When I get older, losing my hair, many years from now. Will you still be sending me a valentine, birthday greeting, bottle of wine?" It goes on- "Will you still need me? Will you still feed me? When I'm sixty four?" There's a spot in the song about holding grandchildren on your knee and I plugged in some of her grandkids names. Anyways- lots of laughter and singing along at the table. The whole restaurant erupted in to cheers after that.

I got several pats on the shoulder and compliments on the performance from fellow diners and staff alike. It was such a pleasant evening with great food and electric conversation and good friends. There was clearly a level of wonder at how much fun we were having at our table and everyone else would have rather been sitting with us at the happening table. It created a certain unspoken jealousy that we were the coolest ones in town- and it is really difficult to be the coolest anything in Scottsdale!

I made a similar cake one year...Michael asked a girl to a school dance by taking a typewriter cake to her with the invitation written on the "paper". That's pretty cool.