I was on DJ duty at the Ishikawa Dragon Bar-b- que today. It's a little PTO fundraiser at the elementary school down the street from here. It was kind of an end-of-the-school-year-end-of-State-mandated-testing-party that would have been even better had it been held closer to the end of the school year but the weather is much nicer now to have such a celebration. 6 or 8 classrooms at a time had lunch served out in the courtyard in shifts. I had a few announcements and giveaways from local merchants to make it fun in addition to some good music. Parents were invited to come down and have lunch with their kidlets.

We had a screaming contest. The 2nd graders won by a landslide! I reminded them that I was a grown up now and that Principal Heath couldn't make me sit in her office for having a screaming contest but that she may still take me out in the parking lot and beat me up. The amount of dust kicked up by 100 dancing 6th graders at the last lunch shift was alarming. I'm glad the food was kinda put away by then. We did the YMCA, we did the cha-cha slide, we did Hannah Montana. It was-- lovely. I hated to get those kids so worked up to send them back to class for 2 more hours, let alone 25 more school days.

It is good to have several thousand watts of sound reinforcing power at my disposal, but the mistake many DJs make is that they think they need to be loud to be heard. There are a hundred other ways to command attention without making loud announcements. The dying art of story telling is one of them. When the kindergartners and 1st graders came out, (there were about 80 of them) I said hello to them over the sound system and then lowered my voice and drew them in to a story about how I had arisen from my bed early in the morning while everyone was still asleep and the stars were still shining and I drove my van out into the desert north of town here by the Salt River and I quietly hid behind a giant Saguaro cactus until the sun started to come up and I and waited for a dragon to make its way down to the river for a morning drink... then I got out my sword and I quietly snuck up behind the dragon and I SLEW the dragon and his guts were spilling out everywhere and I was slipping around in his guts and I put it in my van and brought it back to the school cafeteria and they cut it into little pieces and they threw it on the grill and now we'll be having some Dragon burgers and some Dragon dogs and they will be Deeeee-lish! I added that it was a lot of work and that I hoped they would each enjoy their Dragon burgers and Dragon dogs... and then I smiled at them silently for a moment.

There was sort of a collective question mark over their heads.

What was so fun and great about it was that they quieted down and listened! No shouting required. You could see the imagination in their eyes and the wheels turning in their heads to processing the thought of a dragon living in the desert north of Mesa Arizona and that their favorite DJ could kill it and then there was the added wonder of what a dragon burger might taste like and whether there might be anything else to eat.

I am the El Presidente of the American DJ Association and our educational content this month was about developing the next generation of DJ customers. It was a really fun event today and I feel like I helped to tie it all together and turn it from a good event to a great event and that those kids will grow up thinking that if you want a great event, you hire a professional DJ.

I guess if you just want some story time, you could call me for that too.

Pizza by the slice

I attended my final class last night. The University of Phoenix was nice enough to send a clerk from the academic advisors office with three Dominoes pizzas to congratulate us... "Two slices for you young man? But of course! That will be $30,000 please." Yes, in addition, to the sausage, could you sprinkle some gold flakes on mine?

I'm glad to be done but it was an anti-climactic finish. Maybe I'll feel different at the graduation ceremony in 3 weeks. Wait a minute, I'll get to wear that funny/cool square-hat-thing and a choir robe and THAT doesn't suck! They are having a member of the faculty speak and a student speaker and then a song or two and then read the 1000 names and turn us loose on the world. They aren't even getting a b-list local celebrity to speak! They did promise that the bagpipe regiment would be worth it. I've got a DJ gig Los Angeles the night before until well after midnight and will be driving like a mad man to get back to University of Phoenix Stadium in Glendale by 10AM.

I don't know if these statistics are correct, I didn't confirm them. There are less than 25% of the citizens of the U.S. that have bachelors degrees and less than 9% that have masters degrees. So I'm joining a rather small group of people who have put themselves through such stringent paces. I'm trying to make arrangements to have my son Javin come out with me from California because I want him to see that education is important and that it's something we make a fuss about as a people. We only wear those square hats on exceptionally special occasions such as this.

Side note: My sister is getting her Masters Degree at Northern Arizona University Skydome at 2PM that same day. I was thinking of driving like the dickens to get up there for hers after mine, but after a 6 hour all night drive from LA that doesn't sound too appealing. We'll have to have a celebration another time.

I graduated High School and left home at age 17 and had no clue about what insurance was and how to work a check book and I was ill-prepared for adult life which contributed to some terrible mistakes in relationships that I am still recovering from 25 years later. I have had a really good experience at UOP and I feel like I could contribute in a wonderful way to a business or a non-profit or a government agency, with some of the cool things I have learnt, coupled with my life experience, my DJ/entertainer career and 18 years in the reinforcing steel business, but I have no more interest in corporate America. As I look back at some experiences in business with a more classical training and perspective, I say, "You know what? I did that right!" I also think of a few other things that were accomplished only by shear force of will and there are smarter and easier methods. For the most part, it has given me a structure for otherwise crazy and ethereal thoughts. The structure makes me define better or even defend my position sometimes. It fleshes out alternate ideas and bridges gaps.

When a dog chases a car, I ask myself what that dog thinks he is going to do with that car if he catches it? Now I have a degree- and I wonder what I am going to do with it. I guess I'll start with the big job fair on Saturday morning. For the moment, I seem to be able to make a decent living as an entertainer and as long as it's fun, pays the bills and the customers keep calling, I'd love to just keep doing that for now.

This note may sound depressing and negative-- it isn't. I'm quite fond of life and I prefer not knowing what is around each corner. My life is a great balance of taking what I want and yet wanting only the simple things that life has given me naturally and freely. It is seemingly planned and yet entirely random simultaneously. Who knows what is around this next corner? Film at 11.
Posted by Curtis Whipple at 12:41 PM 2 comments:

Beauty and the Beast

Several wedding vendors got together yesterday to do an all day promotional video and photo shoot to make an all-inclusive-one-stop-recession-buster-wedding package. We'll provide the venue, the caterer, the florist, the minister, the photographer and a DJ- any guesses? Anyone? Yes, me! Just sign on the dotted line and a wedding you shall have!

Models were hired, tables, chairs and linens rented, we set up a hotel banquet room for a ceremony, a formal dinner, a dance, everything. I set up my sound system and lighting rig. We photographed the spread of food, and then we stopped down for a break and we ate the spread. Ginny Solis from All About Catering is the best in this city.

I have mentioned Kym Ventola in this blog a couple of times regarding her brilliant work. This photo proves it again. I don't know if this one will even be used in the promo package but i love it. The lighting rig looks great, the texture and the balance and the composition is really cool too. It is clear that I am not the groom, I am the wedding entertainment. I love the spot of light on either side of us on the dance floor and the criss-crossing beams aimed at our heads. She is so beautiful and I am so beastly. Overall, the photo just speaks the celebration! It's very playful. 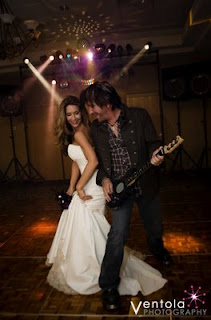 Rebecca, the model you see there, is great at what she does. I could never exude emotion so effortlessly to have it be captured on film- she does it. In an earlier shot, she was just leaning up against a plain wall in the back parking lot for a few shots and was able to take that and run with it and create something emotional with no music or stimulus to create what would be an otherwise natural emotional response.

It is interesting how music can change a moment from ordinary to extraordinary or from flat to three dimensional with sights, sounds, smells, memories etc. The hotel had a big grand piano in the lobby and Kym and Rebecca were noodling around with some shots at the piano as I was passing by with some equipment. I shouted, half jokingly, that Rebecca should sit on the piano and I would play it. The live music changed that moment to a little bit less work and a little bit more play.

I hadn't planned on actually plugging in my DJ sound system, it was a photo shoot for heaven's sake- it was set up just for show. I ended up plugging it in early in the preparations because all of the makeup artists and hotel staff and other workers that were helping with tables, chairs, moving lobby furnishings etc. wanted some music. I did fire it up rather loudly for this picture. You can almost hear the rock and roll. Listen for a minute... do you hear it too? There was nothing posed here- the music made that picture.