This is the earliest picture I have of me as a DJ. This was taken in 1983. I was 17 yrs old and already 3 years into what has become my career. I didn't count myself a professional until about 5 years later when I did my first big budget event at one of the local country clubs in Riverside CA and I changed that event from a good event into a great event and that golf club became a regular customer for many years. 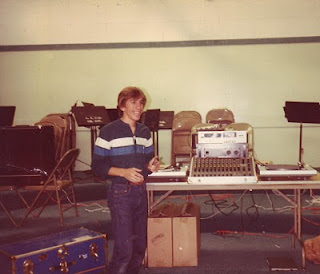 This is my current DJ rig. It can do about 20 times what that mess up there could do. 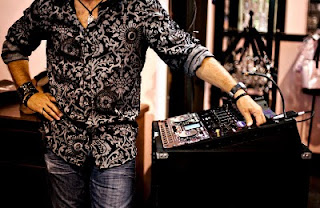 Here are some pictures from just this past weekend. 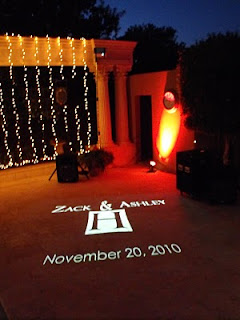 I'm doing the Cha-cha slide with a young bridal party. 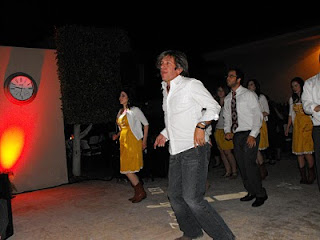 I've got lots of new toys since that first gig back in 1979. This was at King Ben's Pavilion at Golfland/Sunsplash on Friday night. I attracted 200 of the 350 in attendance and I had to compete with Lazer Tag, miniature golf, fried food, a major arcade and a lovely evening with a full moon. Once they discovered that I was there under the tent and I meant business, they packed that space and stayed and danced until the wee hours of the morning. 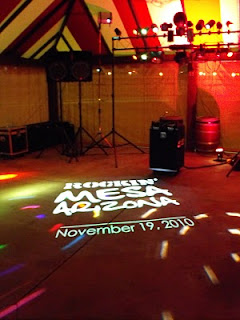 FUN FACTS from 31 years in this industry-

Other than business cards, I never spent a dime on advertising until early 2007 when I was the new guy in Phoenix.

Cool places I've played: Under the nose of Air Force One at the Ronald Reagan Library, Queen Mary, Disneyland, Temecula Balloon and Wine Festival, California School for the Deaf, The Boojum Tree, Huntington Beach- and I mean ON the beach, Bear Creek Inn, atop a San Francisco skyscraper with a perfectly framed view of the Golden Gate Bridge, Wrigley Mansion, The Sanctuary, Scottsdale Center for the Performing Arts, Tempe Center for the Performing Arts. I've worked at events in Oregon, California, Arizona, Utah, Florida, Illinois, Connecticut and Texas.

Interesting situations encountered: A groom was unfaithful with a bridesmaid on Thursday and the bride discovered the encounter on Friday and decided that she didn't want to marry him on Saturday but she kept completely quiet and went ahead with the plans in order to embarrass him publicly at the wedding ceremony. When the officiant asked who thinks this couple shouldn't be married, she let him have it!

Only two major equipment failures to speak of in 31 years- New Years Eve of 1983, power amp blew up with sparks and smoke and everything. A guitarist in attendance had an amp in his car and we made it work. 18 months in to digital DJ work, in about 1999 or 2000, my computer software froze. I'm not a computer whiz but witnessed a miracle as the software re-loaded at the moment when I was about to announce the bride and groom first dance. I have redundancies in place against that ever happening again. I did have a lighting rig collapse during set up and as one of the truss bars came down, it narrowly missed hitting me in the head but it brushed against the front of my chest and sliced my left nipple rather severely. I'm pretty religious about the safety latches and pins but this was during set up when some of them weren't installed yet.

Prom at California School for the Deaf in 1993 and 1994. "Hearing" some of those songs in ASL was beautiful and moving.

A car entered a rural two-lane highway from a driveway and I crashed into the drivers door at about 50MPH and lots of DJ equipment came flying through my back window. I nearly careened down a ravine. Brought the truck to a stop safely several hundred feet down the road. The driver was injured and taken to a hospital for a couple of days. I was a mile away from a wedding venue and two hours from the ceremony start time. The venue operator dispatched someone to come and salvage the equipment from the back of the truck and went and set it in place as best they knew how. (it was a place that I worked regularly) Several road cases were destroyed but all the crucial equipment was intact or at least in working order. I showed up later and took care of the wedding. My truck was totalled. The wedding guests never knew anything was amiss.

Someone offered cocaine once and I refused and asked him to leave the stage because I was trying to work. He apologized but only thought I was upset that he was offering so openly so he offered again with his hand down by his hip and backwards- a bit more discreetly. I don't do drugs.

The fathers of the bride and groom got into a fist fight in the foyer in sight of the reception hall. Both left in handcuffs.

Music: I can't say that I've played Michael Jackson and the Beatles at every gig but I've played them at most gigs and I can't think of a gig where a song or two wouldn't fit in somewhere. I never tire of those songs and they always fill the dancefloor. I'm a huge Styx fan but I rarely play them. Not all that danceable. I do a pretty cool DJ mix thing with Lou Bega's Mambo #5 and Styx's Too Much Time on my Hands once in a while. First song I ever played as a DJ was Gary Numan's Cars. Click here for my previously shared thoughts on the impact of that song on rock music. Thank you Michael and Paul and John for the music. I love you guys! Honorable mention to Van Morrison and Glenn Miller.

I love what I do because everybody is always dressed up, they are celebrating something meaningful to them. You've got the food, the music, the lights, the occasion, the anticipation, the color, the heritage, the fun, the electric conversations, the flirting, the dancing and I get to be the Pied Piper and help them release all that celebration inside of their hearts.

Normally people would say "Here's to another 31 years!" when writing something like this. I don't know if I have 31 more years in me- maybe this will be me in 31 years when I'm 76 years old, but I do love what I do and as long as there are customers who want me to do it I'll keep doing it as best I know how or even improving it as new technology comes along. Thanks to all of you for the great life.
Posted by Curtis Whipple at 1:19 PM 3 comments: