Haven't written in awhile so let me 'splain, no, is too much, let me sum up. Buttercup is marry Humperdinck in little less than half an hour...

I've had a few adventures since we last talked. I donated sound reinforcing and music to a small cancer walk that got rained out. The goal was $13k and they still raised $15k in spite of the weather. This woman is on the board of directors and she took the mic for a minute to thank the walkers and tell a bit about the work of the charity organization "Lungevity." 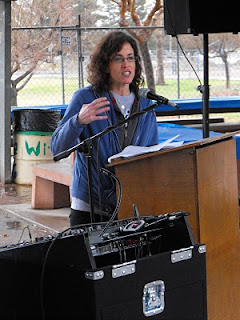 The city park where the event was held was under some major construction and right where I was loading in the equipment, the sidewalk had been dug up and I had to cross about 8 feet of mud. I had considered wearing white that day. I was also having a good hair day at the outset- so much for a good hair day... I was up to my knees in mud when I was done. The equipment road cases got some mud splatters which I still haven't washed out but it was a good cause eh? I took my boots to the car wash to get them hosed down.
A recent trend for aging rock stars who are attempting to please long-time fans AND newcomers to concerts is to play an entire album from back in the day in sequence and perhaps b-sides or other associated nuggets from the same time period. If you don't like the album of the night, don't come to the concert. I recently heard Billy Squire play "In the Dark" in sequence and it was crazy-awesome! A favorite artist of mine- Gary Numan has a substantial catalogue after more than 30 years, but most U.S. media reduces his entire career to "Cars." To please fans that want that song, he recently played The Pleasure Principle album in its entirety. Most of the time however, he plays only newer material.
I said jokingly on Facebook and to some industry mates that I was going to be playing the Chitty Chitty Bang Bang soundtrack in it's entirety at a piano gig for an industry function. There are some great songs in that movie. The suggestion took on a life of its own but I did play "POSH" and sang it in a British accent! 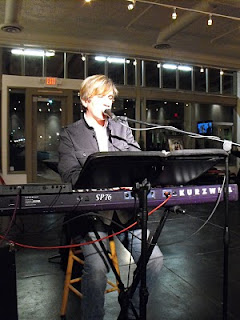 Went on a road trip to Tucson. I hadn't been there in about 18 years or so. Paid a visit to Mission San Xavier Del Bac. It's one of the oldest structures in the U.S. and a highly regarded place among Catholics, historians and architecture enthusiasts. The Mormon Battalion never engaged in warfare, but if they had, it probably would have happened here. Mexican soldiers were stationed here (or near here) and upon hearing the news that 500 U.S. soldiers, who were Mormons, were approaching, they fled and never engaged. The march from Iowa to San Diego- the longest march in U.S. military history ended without bloodshed- other than the suffering of the march itself. 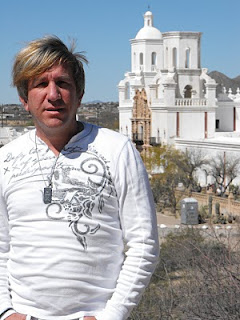 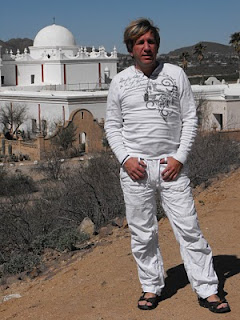 I had a wedding up in Payson about 75 minutes north of here a couple of weeks ago. If you don't know Arizona geography, there are lots of high elevations and mountain country in the center of the state that gets snow in the winter. It was snowing when I arrived to load in the equipment and snowing again when I packed up. It ultimately wasn't a huge snowfall but it was more than I wanted to risk driving in. I couldn't see very well and didn't know the roads well enough. If I could have just got out of Payson 5 miles or so, you drop in elevation very quickly and it would have been just rain, but you climb back up to a higher elevation one more time before coming back in to Mesa and I didn't want to get stranded out in the mountains. Hwy 260 east to Heber and Hwy 87 north to Winslow were both closed unless you had snow chains and Walmart was sold out. There was a line of people to snag motel rooms in Payson that night. I got a room and came home the next day. 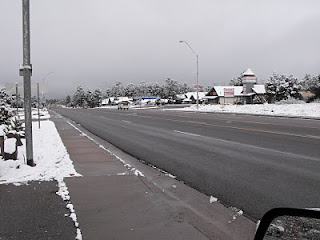 Rocked an elementary school dance, a couple of weddings, a Mary Kay rah-rah meeting- that was actually loads of fun- a valentines dance fund-raiser for St Timothy's Catholic Church here in Mesa. I was seated at the head table with the head priesthood leader of the church. I was honored. I told him a great Mormon joke and he laughed most heartily- flew back in his chair and roared.

Here's a pic from a wedding recently. We are trying to submit this wedding to one of the local bridal magazines to be featured. Here I am as Reverend Curtis calling the faithful masses to worship at the shrine of Rock and Roll. 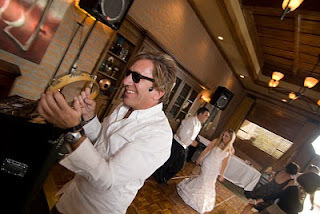 Posted by Curtis Whipple at 2:44 PM No comments: