Ten things that happened last weekend in order from worst to coolest:

10. Forgot my razor. I'm used to a nice triple or quadruple blade razor with a nice lubricating strip so that I don't cut my face up. I had terrible acne as a teenager and still have a few acne scars and pock marks that can get cut with a cheap razor. The hotel I was staying at provides complimentary toiletries that you may have forgotten- the razor from the hotel was a disposable single blade thingy and I sliced my lip very badly, in addition to several other spots on my neck and everywhere else. I won't name the hotel because it was otherwise a very nice, reasonably priced, quiet and comfortable room and they weren't the ones that forgot to pack my nice razor.

9. That's a big ol' desert out there and it's been a lot of years driving back and forth for work. It has been a fairly wet winter and the desert is in bloom and the butterflies are busy pollinating and my windshield was/is a mess! I refilled my wiper fluid twice on the road. I'll have to get out a razor to scrape the bug juice off the next time I go to wash the van. I wonder if I kept that one from the hotel...

8. I got to work with Catalina from Coors and Erica from Heineken at the retail promotion that I was working at. Most of these girls are working through college or have various other reasons and satisfactions that they draw from such jobs... Erica has huge dreams for an agency that would hire men and women for such promotions or other public relations functions. I think she will go far. Erica is on my left. Catalina may be just as able, but I didn't get a chance to talk to her much. 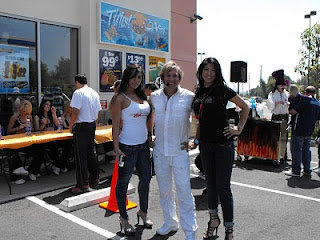 6. I had 12 hours on the road to listen to music. Since I just got a new job playing piano in a dueling piano show, I was listening to familiar songs but with a new ear for what would work in that piano/stage format as opposed to DJ airings or even versions that I would play on the piano during cocktail hour or at a restaurant. My creative juices have really been flowing this last couple of weeks. I seem to be able to learn a new song in 3 or 4 minutes. I'm a bit slow on the lyrics though.

5. I got to work with the Laker Girls. 6 girls on Friday and 6 more on Saturday. 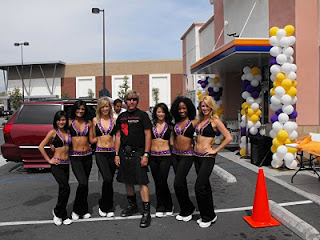 4. I got to watch them dance. They are specimens of feminine beauty and the dance routines are far more complex and athletic than anyone probably gives them credit for. They are very charming, disciplined and trained hostesses representing the Laker organization exceptionally well. Certainly, they drew a crowd to the promotion that I couldn't draw, but I can make people stay and spend money- not just get the free autograph and then split. 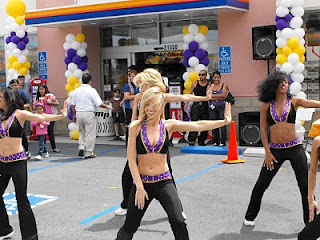 3. I got to work with Dynamite Dave. You can see from this picture that he got to work with the Laker Girls too. Dave and I have been doing retail promotions for many many years. He is a BRILLIANT entertainer and it's always a good day when Dave is around. I think Dave was channelling Johnny Depp last weekend. He had a Mad Hatter thing going on for Friday's costume and he was a Pirate on Saturday. He is really working on his health. He's lost probably 40- maybe 50 lbs since I saw him last Thanksgiving. 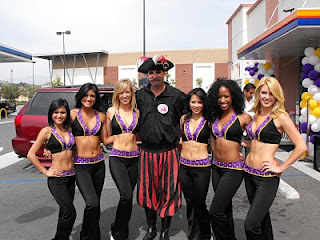 2. I got to spend a bit of time with my good buddy Scott from Orange county. He came by the gig both days to say hello. Without asking, he just sensed that I was thirsty and got me a large lemonade. If I had the presence of mind, I would have asked for something and our host would have offered any drink I wanted as a courtesy, but I hate to ask my customer for those kinds of things when I'm being paid to work. Scott owns several condos that he rents out to students of Cal State Fullerton. If ever there is an empty room, he lets me stay there on my California DJ trips so I can save the hotel expense. My life is better because we're friends- Thanks Scott.

1. Some of you know that I used to teach Old Testament to High School sophomores in a Seminary program several years ago. One of my students has growed up and accepted a full-time ministry assignment in Chicago. Before coming home to AZ, I attended a church service where she delivered the sermon as her home congregation sent her off. Her mom and dad invited me to sit with them and I counted it the world's greatest honor. Her sermon was profound and I think she's going to be brilliant! I would have driven out just for that sermon, but it was cool that the DJ gig paid for the trip. God Speed, Sister Frandsen! 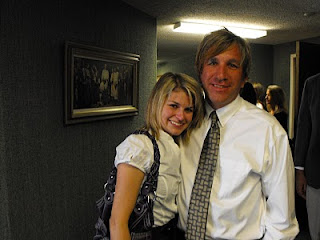 Posted by Curtis Whipple at 3:42 PM No comments: