In Back to the Future Part III, Doc Brown and Marty McFly commandeer an Old West steam train to push the Delorean up to 88 miles per hour to get from 1885 back to the year 1985. The train engineer puts his hands up and asks "Is this a stick up?" Brown and McFly look at each other and conclude "No, it's a science experiment."

I, too, am in the middle of a science experiment that started on Sept 11th. I'm not going to the grocery store or any other store for 90 days. Gasoline is the only thing I'm going to purchase until Dec 11. I store food and water against hard economic times, social unrest, natural disasters or disease outbreaks, I have for many years- it seems to me to be common sense, but plenty of people think I'm a bit of a nut case. I'm testing myself out as if there had been a disaster on Sept 11th of 2009 and I had to live on my own wits. I'm 14 days into it with 76 to go.

Fresh food is going fast. I have about 20 corn tortillas and about 10 large flour tortillas- those should last another 10 days or so. I have a few pounds of butter and just over a pound of Monterrey jack cheese. I mostly ran out of fresh vegetables a couple of days ago. I have a tomato, a red onion, a yellow onion, 20 potatoes and a tiny bit of green onion left. When those are gone, I'll switch to the freezer. The freezer has a couple of bags of frozen broccoli, corn and peas. There are a couple of bags of chicken breasts, a couple of steaks, a couple of Cornish game hens- save those for Thanksgiving, about 36 kosher franks, 1 lb of shrimp, some frozen corn on the cob and 1 lb of bacon.

In a real disaster, of course, there may or may not be electricity and the meat in the freezer would be eaten or shared with neighbors or destroyed in about 2, MAYBE 3 days. I have a hunch though, that even in a disaster, there may be intermittent electricity. Even war torn Iraq gets electricity about half of the time.

There are about 18 eggs left. I don't eat that many eggs and they will probably go south before I eat them all. I have about 2 cups of milk left and that was mixed 50/50 with non-fat dry milk a few days ago. I don't drink the dried stuff on its own even though I found a brand that I could live with in a crunch. We'll see how I feel in a couple of weeks without fresh milk. I may mix it with some nestle quik or certainly use it for cooking or on a bowl of cereal.

I grow a garden year round here in Mesa AZ. There are only a few things that can grow in the summer months here. I usually plant pumpkins at the end of July and harvest those in the 3rd week of Oct. My pumpkin vines got attacked by pests and I took them out today. No pumpkin pie filling or pumpkins for Halloween, but the upside is that I will probably plant my winter garden a couple of weeks earlier- maybe next week. I'll be planting a couple of kinds of lettuce, some cabbage, turnips, radishes and peas. I may be able to harvest a few of them by Thanksgiving. That would be great!

One caveat is that in my travels to formal social occasions as an entertainer, I'll be served meals sometimes. I think that may mimic a real disaster too. Even in the worst of times, one may come across some milk and eggs and fresh veggies once in awhile.

After the fresh and frozen stuff is gone, I have plenty of canned goods- fruit, corn, jams, black beans, refried beans, pork and beans, canned chicken, canned beef, canned tuna etc. After that, I have plenty of dried beans, rice, wheat etc. I have sugar, dried celery, onions, carrots etc. I have yeast and flour to make bread once or twice a week. I do that regularly anyways.

Last night I soaked a big bowl of black beans and they have been in the crock pot today with a can of chicken broth. The house smells great. I hear some burritos calling my name! A big flour tortilla, some Monterrey jack cheese, some salsa, and a big scoop of black beans.

I own a networking group here in Phoenix for wedding professionals called the Wedding and Event Network (WEN). We get together once a month to shake hands and trade business cards. We are hosted by hotels, golf clubs, bridal boutiques and other reception halls all over the Phoenix metropolitan area each month. I'm the third owner in the 12 year history of WEN. It was started by a wedding officiant and his wife. Then it was owned by a brilliant event planner for a few years and now me. Once a year, our meeting is a bit less networking and a bit more of a party as a thank you to our members and industry friends. Everyone is invited to wear white and bring their spouse or a date. It's the White Hot Event!


Here I am with an imaginary rope, pulling a few dancers out on to the floor. 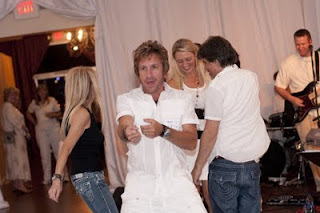 The Hamptons have played at the White Hot Event for several years. They are the best wedding band in Phoenix and have always volunteered for this event- even before WEN was the respected organization it has become. Thanks guys! 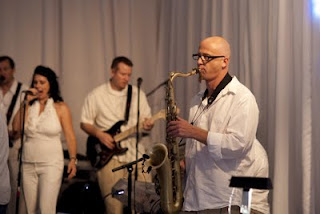 This is Chandra Keel on the left, the event planner that I had for this event. I gave her some basic parameters for the event and turned her loose on it. She nailed it. That's Lisa from Arizona Weddings magazine on the right. 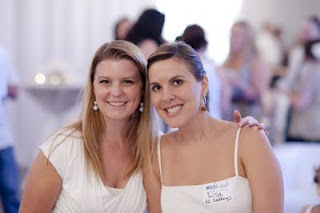 Here's a group shot. The event was at Tre Bella in downtown Mesa. It's an old warehouse, transformed into a reception space. The adjacent space has been converted into a charming wedding chapel. The photographer, Keri Doolittle is shooting from about the center of the room so there is a similar sized crowd behind her. Click on her link for more pics from the event. Chandra Keel is about center shot in this one too. 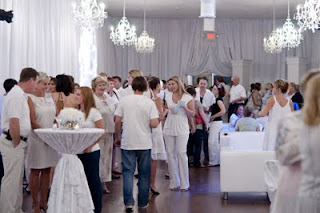 Each year we select a local cause or charity and ask attendees to donate to the cause if they have the means to do so. We collected almost 400 lbs of food and $150 in cash. WEN matched those donations dollar for dollar. St. Mary's was most gracious and appreciative. I'm still alarmed to hear of hungry people and empty food banks in our city of great wealth. 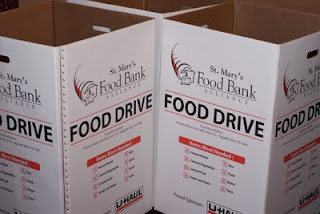 This is my friend, Amy Vandervort- a brilliant event planner and the previous owner of WEN. She just wanted to raise her kids and simplify her life. She may get back in the game when her children are older, but if not, she went out at the very top of her career. Her last wedding was featured on a major TV show. Ray Grace, Ray the DJ, a fantastic local mobile DJ and one of my professional brothers is on the right. 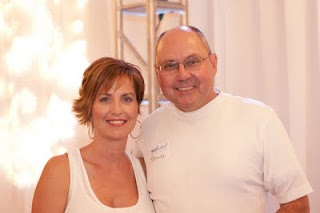 Here I am talking to Courtney Moran from Lollicakes Company. They provided desert that night. Wedding cake- on a STICK! It was deeeeee-lish! Each lollipop represents about 4 or 5 bites of wedding cake- individually wrapped- like a lollipop. This picture was taken just before the event started and the lollicakes were still under refrigeration. 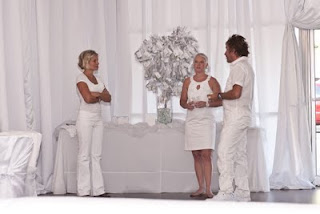 It's really gratifying that everybody in this industry makes me feel like such a rockstar. I'm blown away. The network operates on the trading of professional favors for exposure to others in the industry. My email list is substantial so even those who don't attend will see the logos of the participating vendors on the email blast that goes out to the industry in advance of each meeting.
There are a few who think that my group is irrelevant or redundant. Each of us are members of our various professional associations- I'm the president of the American DJ Association- we do have a few members in common, but we have a very different purpose. We each have great educational content at our various chapter meetings. This is one forum that provides inter-industry connections. It's not a meeting of just photographers, or catering executives or just event planners.
In addition to great networking opportunities, there is a chance to talk about things that we can do to add to the excellence of the industry since we all work together at weddings and other social events.
Next month's meeting- South Beach/Miami theme at the brand new Homewood Suites- Hilton- Phoenix Airport.
Posted by Curtis Whipple at 3:16 PM 1 comment: