Had a corporate gig in Scottsdale a couple of weeks ago and shared the bill with a great magician. We had lunch together last week. The event was for an engineering firm. This was my 3rd Christmas event for them. There was an engineer type who came up during cocktail hour, sucking on a soda through a straw, wearing an ill-fitting, out-of-date jacket and he looked incredulously at me and my equipment and asked if I really make a living at this. I got really serious and lowered my voice and tilted my head downward to his, squinted my eyes so they pierced him and I said, "I make more than you..." It frightened him and he walked away. I bet I DO make more than him. He's lucky I didn't respond with, "Do you really make a living sitting around an office doodling?"

People often approach me, who may be somewhat interested in what I do or how I do it or how the equipment works and there also seems to be some romantic notions about the life of a travelling entertainer with the lights, the stage clothes and everything. I know that what they are saying is, "This is really cool, you must have a great life, and I want to be close to you for a minute." But what comes out is, "Do you really make a living at this?" Or worse, they have to tear it down because it shines the light on their boring or otherwise out-of-control life and then what comes out is "When are you gonna play something we can dance to?" or "We can't dance to this, what WE want is..." I look at the dancefloor filled with 75% of the attendees and wonder who elected them spokesperson for those who ARE dancing? I just try to remember that what they are trying to say is- "This is really cool." I DO love my life and my chosen profession.

Since I'm on this subject. I have had two people in the last 2 weeks come up and request the very song that is playing. Are you even listening? They must have really thought it was cool and wanted any reason to come up and say hello.

Made a road trip to LA last month for a concert.

While in LA, had lunch with my son, Javin, he turned 20 this week, met his girlfriend, liked her.

I don't mind what speed people go out in the desert, but I'd like them to maintain it fairly consistently. The left lane isn't really called the fast lane- it's the PASSING lane. If you aren't passing, GET OUT OF MY WAY and let me pass! Don't use the argument that you are going over the speed limit anyways and I should just deal with it. I don't have cruise control in the DJ van but I can maintain a pace within about 2 MPH pretty well. I was in my car for this trip and used the cruise control and it was painfully obvious that people were more interested in texting and yakking than watching the speedometer.

Gary Numan sold out two nights at El Rey Theater and melted some faces! He played the entire Pleasure Principle album to celebrate 30 years since its release. It's an important album because it was the first rock album devoid of electric guitars. 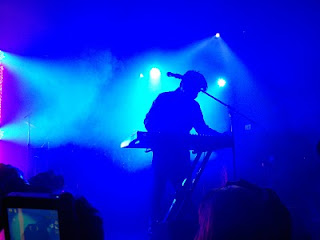 They strapped on some guitars for the 2nd half of the show and played some current music and other fan faves from the catalogue. Steve Harris is an unknown treasure in the guitar world- a madman on stage and I almost took a guitar to the face more than once. A few years ago at a show in San Diego, he almost took a tumble off the stage but I caught him. He looks fairly normal here. He's a specimen of manhood, the last time I saw him, he was shirtless and had a black line painted down his face and neck and chest like a zipper- pretty scary. 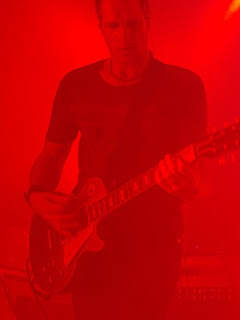 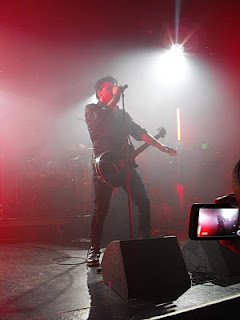 I had a backstage pass and I got to go to sound check and talk to Gary Numan. I pressed him about bringing the show to Phoenix in the spring when the new album comes out and he said he' would have liked to come this time- they did have some interested promoters- but that he has kids now and doesn't like to be away from them for so long. Next tour, he said he'd do the east coast and then spend some time with family and then hit a few more cities in the west than he did this time. He did thank me very genuinely for driving 6 hrs each way for the show and promised that he'd work hard to make it a a good one. It was.
I know he doesn't particularly like meeting fans but he does it because it means a lot to fans. I just thanked him for the music, got an autograph on a DVD and I let him go. At the height of his stardom in the 80s, he received a live bullet in the mail from a "fan"- a bullet is really hard to get in Britain. The note said that the bullet had been in a handgun (even harder to get in Britain) that was snuck into Wembley Stadium and he had intended to kill him but had such a good time at the show that he decided not to... 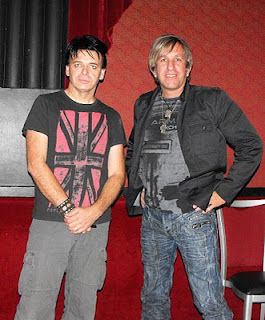 There was a photographer with the local music press up in front of the barrier at the Numan show that was a fit and trim guy but still looked a bit like a nerd. He had a shaved head and there was a glaring, long, curly hair growing from the top of his ear. Not a spot on the side of his head where he mistakenly missed shaving, it was ON THE TOP OF HIS EAR. It would seem that a photographer would have good enough vision to have spotted that in the mirror each morning. The stage lights made it really shine.
The opening act sucked.
I have about 6 little cases of ear plugs in my desk in my home office. I always buy a set for each concert I attend because I always forget to bring the ones I have. I protect my hearing pretty religiously. The drug store a couple of blocks down Wilshire Blvd from the El Rey Theater sold me a case of about 10 pairs of ear plugs. A few fans in the front row with me were plugging their ears in the first couple of numbers from the sucky opening act and I offered them my extra plugs. At first, they thought I was offering drugs or something. I had to point to my ears with the purple ear plugs in them. They accepted my offer.
My buddy Scott from Orange County was going to try to buy a ticket after the start of the show when the ticket sellers may be a bit more desperate. Out front, he had offered to snap a pic under the marquee for a dad with two teenage daughters attending the show. He got down on his knee and really framed the pic nicely. For his gesture, he got a spare ticket intended for the mom who was sick. Scott is 6'4" and he pressed/wrestled his way right down front anyway. You suck Scott!
Said hello to a fellow fan that I've seen at shows over the years... he's now a she.
Talk show host, Craig Ferguson and U2 guitarist, The Edge were in attendance- both proclaim Numan fandom.
Gary Numan was supposed to have headlined the Coachella Music festival but was stranded in Britain because of the Iceland volcano last spring. Craig Ferguson had purchased a $270 ticket for the festival and ranted on and on in his opening monologue the next night about not getting to see his hero Gary Numan.
Did a corporate gig for CelllularONE at Hon-dah resort up in Pinetop last weekend. They ain't never seen nothing like me up on the mountain. I sent 'em home in body bags. They had a singer for dinner hour and the hotel staff had man-handled a beautiful white Young Chang grand piano (rather expensive) into the space right beside me. I would have never climbed up there if it was in better condition but the hotel crew had no idea how to handle a piano and it was already pretty scratched up on each corner. It was the perfect platform for me to dance/rock out/do my Baptist preacher routine... They called me on Monday AM and booked me for next year.
The spouse of an attendee came up and told me that he's a DJ too and made a couple of requests that were way out in left field from the format of the evening- THE SONGS I WAS HIRED TO PLAY- I always wonder how good a DJ is when he's talking to me on a Saturday night and not working... Hmmm.... I think he was using cocaine too. I know I talk fast but this guy was going 100mph and couldn't hold still for a second!
Picked some limes at Uncle Dave's house in Pomona CA. Limeade for the last month or so. Juiced it all and made ice cubes out of it. They are in a freezer bag now.
Posted by Curtis Whipple at 10:11 AM No comments:

The greatest Christmas songs ever

That's right, I said that and I'll say it again because I'm controversial. I'm like Geraldo.

Here they are, the GREATEST Christmas songs ever:

8) Peter, Paul and Mary- Children, Go where I send thee

5) Dennis DeYoung- When I hear a Christmas song

4) The Chipmunks- Christmas don't be late

1) Andy Williams- The most wonderful time