And then there was one

I'm fast approaching graduation from University of Phoenix- 8 more Wednesday nights! After April 15th, I'll be lernded gud! I have had a really great experience at UOP. If I can get some fire in me to get a Masters Degree, I'd consider teaching there. I don't know if I have a Masters degree in me, but in any case, I need to take some time off and replenish the financial reserves for awhile.

When I started there in January of '07, they transferred all of my credits from Riverside City College way back in the 80's, including some dubious classes like "History of Rock and Roll" I had to take algebra over again because I'd earned a D way back when. D is barely passing, but it's not transferable. Math is not my gift in life and I had a great teacher at UOP, Ms. Bledsoe, who really brought it to life and I thought- "Well if Mr. Bellman in High School had explained it that way when I was a sophomore, I would have got it!"

In my first few months, I was taking some basic classes that I hadn't done earlier and then as I got onto my Bachelors of Business Administration track, I have largely remained with the same students pursuing the same degree in each of my classes for the last year. In addition to individual assignments and readings, we are divided into teams of 3 or 4 for projects where you take real world or fictitious companies through various market simulations and scenarios and do reports or presentations to the class on findings.

This is my team at University of Phoenix. We have worked together for about a year and we'll be parting ways after this class. I'm finishing and they all have two or three more 5-week classes. 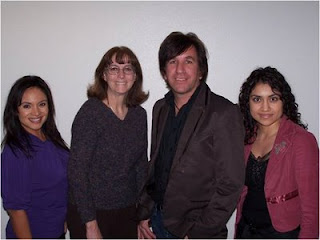 That's Andrea on the left. She works for Apollo Group which owns University of Phoenix. She's a corporate liaison. I think she will have a great career in Public Relations or Broadcasting or Politics or whatever she feels to do. She is really got a gift in life. Laurel is on my right. She works for Banner-Baywood Healthcare in their construction division. She has been there for 30 years and has is incredibly valuable to them. She doesn't need a degree, but is doing it for the love of learning. She's actually approaching retirement- I know- she looks younger than me! Blanca is on my left. She has worked for the city of Phoenix for many years with their "Hope 6 Project" which assists low income families with housing. The City of Phoenix is having a major financial crisis and her job may be on the cutting block. We are praying for her but even without the degree she is earning, she could do just fine on her charm alone! She's about the nicest woman you'll ever meet.

It has been absolutely a pleasure to associate with them. It is interesting that people who have no other connection or bond- and no reason to have one- can go through a rather intense school or work experience together and come out of it at the other end having such affection for each other. I'll miss them terribly.

YIPPEE for one more class. I have one more Wednesday night then 8 more Tuesday nights and I'll be finished with my MASTERS. I am so ready to be finished as I'm sure you are too. No more papers to write!

That is fun to become friends with people you wouldn't otherwise cross paths with.
Good luck with those last few classes. YAY!!!