In the previous post, I jokingly commented about never wearing a tux and that the previously posted tuxedo picture was the genesis of my DJ career. My sister Cindy said I should do a comparison shot- then and now. This is the earliest pic I could find as a DJ. I think this was from about 1983, I was 17. I was already 3 years into my career, but I still didn't know it at the time. When I started in 1979, music was just a way to get girls and make some chump change in high school. When I went to Southern California in 1983, I realized that a person could make a living at it. I don't think that I became a true professional DJ until Susan Marshall's wedding in 1987 in Riverside CA. She was a girl that I had become friends with in college and she asked me to DJ her wedding. That was the first big budget event I ever did and I was just really on my game that night. All of the things I had learned as a keyboard player and as a band leader- things about showmanship and stage presence along with some technical prowess as a DJ really came together and I realized what effect an entertainer could have on a social occasion. I took that event from a lovely wedding to the social event of the year. That golf club became a very loyal customer for many years, I booked about 10 other jobs from people in attendance. 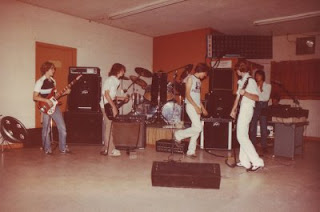 While looking for that last picture, I also found a pic of my high school rock band in 1981. There was a time when "Fugitive" ran the show in Northern Arizona. Those two furious summers filled with church and school dances, skating rinks and grand openings were lots and lots of fun. That's Gregg Ahmann on the left on the classic 1968 Rickenbacker bass guitar. Everett Livingston on lead guitar. He had the perfect rock and roll hair and he played pretty good too. My cousin Tommy Whipple buried behind the drums back there. That's me stepping away from the mic after singing duties. Jason Atkinson, in white, on guitar looking towards me. Over by my keyboards is Leslie- I have forgotten her last name but I think it started with an A. She had a great rock voice and sang like Pat Benatar. Good times! 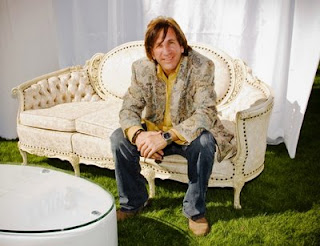 Here is a current pic of me. I already posted this one a couple of months ago but I love this photo because it says everything I would want to say about a DJ/entertainer but it isn't the gratuitous microphone shot or the headphone shot or the "standing next to my mixing board wearing my goofy tuxedo" shot. Kym Ventola took that shot last winter out at the Wig Wam Resort in the west Valley. The more I see her around the industry, the more I am impressed with her work and her abilities.

I have this weekend off from DJ work but it is the last one off for the next 15 weeks!
Posted by Curtis Whipple at 10:43 PM

Enjoy your weekend off.

I didn't realize you performed that much as a rock band. I was off at college by then and I don't know if I ever heard you play :(

Ditto. I thought you were a garage band that always practiced but never performed. What fun memories.

And by the way, whenever I see pictures of your younger years, I'm amazed at how much you and Jeff look alike.