Grey Poupon? But, of course!

I have often wondered where it says in the DJ rulebook that the official uniform of a DJ is a tuxedo. Actually, I'm not aware that there even IS a rulebook for such matters. I'm of the school of thought that since they are not hiring a business manager, an attorney, a matre'd or a waiter, that I shouldn't dress like one of those. They are hiring an entertainer. While one should not be disrespectful to the overall decorum, a DJ should look the part for which he or she is hired.

I once played at a class reunion and wore an expensive and wonderful dinner jacket and was asked by the class committee to put an old football jersey over it as the wait staff and bartenders were doing. Ummmmm... NO. I don't want to be mistaken for the water boy as I pass by a table. I didn't wear this fabulous jacket to cover it up with a 20 year old, sweaty, musty football jersey.

Most DJs look fairly foolish in their outdated tuxedos and ill fitting cummerbunds and a fancy pin for the top button instead of a tie. Worse still are the guys who still wear just the vest- not that they removed the jacket as they began working the room- they didn't wear a jacket in the first place!

Most of the world has gone very casual and only the most formal, high-society events require them. I haven't seen a wedding in my 30 years as a DJ where anybody but the wedding party wore tuxedos- well maybe an occasional grandfather, but that's it. Jeans and a nice tailored shirt and jacket or business suits or khakis and a polo shirt are most common for wedding guests.

When asked to explain to a potential customer what it is that makes me different than all of the other DJs and why they should pay my higher price, I explain that I am the anti-DJ and that all of the cheesy things that other DJs do will not be done by me, including the wearing of a bad tux or the playing of the Hokey Pokey or the airing of stupid announcements like "Ladies and Gentlemen, put your hands together for..." Is there nothing that might elevate our industry beyond that? Why can't those guys think of something else to say? 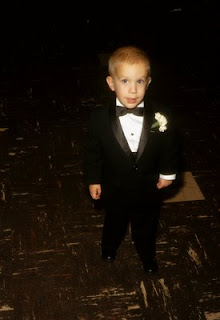 On that note, here is a pic of me wearing a tux a few years ago, well, actually, a few decades ago at my Uncle Conrads wedding. I gotta admit, I do look pretty good in a tux. Maybe I'll have to rethink my anti-DJ strategy... ummm... probably not today though... I wasn't the DJ that day, but it may have been the genesis of my career in the Wedding and Event business. Maybe I could use this photo as part of my ad campaign?
Posted by Curtis Whipple at 7:50 PM