If I wasn't aware of the economic crisis out there, I would never know it looking at the malls and the restaurants. I DJ'd a huge Cinco de Mayo party at Cantina Laredo in Scottsdale last week and the place was packed. All tables sold out for the whole night several days in advance. People were allowed in to the bar/patio but were alerted that they may or may not be served any food from the grill. I was supposed to play until 9PM so they could close the grill at 930 or so and close at 10PM. That place rocked until 11P! I looks like it will turn into a regular Thursday night event for me alternating between DJing, hosting karaoke or piano playing. 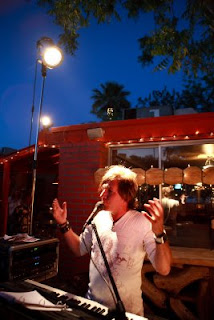 A couple of weeks ago, I played piano at an industry function in the courtyard at Old Town Torilla Factory, also in Scottsdale. The write up said that "in a voice reminescent of Rod Stewart, he played and sang for nearly two hours" it concluded with something to the effect of, the wedding industry hears more than its share of sappy love songs and the set included NONE of those but the selections were known and loved songs that weren't the obvious and over-played songs usually aired by piano players. They mentioned me in the same sentence as Rod Stewart?!!?! I'll take it!

Here's somebody that was "moved" by my performance. 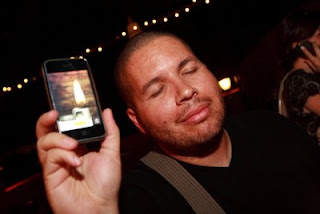 Playing and singing is something that I have always loved but never regarded as my gift. Since I stopped working a day job 3 years ago, I have taken the time to develop it into something that I feel very confident about- something that it is entertaining and can even move people! Word is out regarding my abilities as a musician in addition to my DJ abilities and I have been approached to play at a few other great restaurants around town on weeknights. When you do a good job, the money always seems to follow. When you do what you love, you never work a day in your life. Fun stuff!

Thanks to Stuart Thurkill of Eyes 2 See Photography for snapping a couple of photos that night.

Posted by Curtis Whipple at 4:17 PM