I was just given the honor of being re-elected as President of the Phoenix Chapter of the American DJ Association. 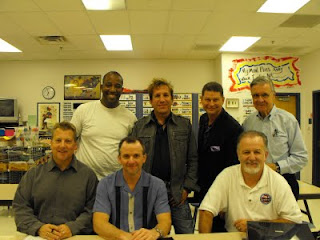 It is a pleasure to associate with these men and try to add to the excellence of the industry. Back row- Joseph Ivy of Ivy Entertainment and a brilliant competitive ballroom dancer. I'm kinda in the middle there in back. On my left is Scott Faver of Party Favers. Scott speaks at other ADJA chapters around the country and is often a featured presenter at major industry functions and trade shows, he's the "Game Master" and a brilliant networker. Back row, right is Robert Wilson our treasurer. In front on the left is Secretary, Bill Limbach, the DJ For You. In front of me is Mark Sanchez of Professional Mobile Entertainment, our vice president. Wearing white on the right of the picture is Dr. Drax, the national President of the American DJ Association. Drax and I have known each other for many years now and associated professionally and personally in southern California long before I joined the association. Drax is his stage name and I always knew him by his real given name. I think I may be the only one that knows his name. It's kinda like the Seinfeld episode where everybody learns Kramer's first name is Cosmo.

Thank you to the chapter members for your confidence. I will do my best.
Posted by Curtis Whipple at 11:42 PM