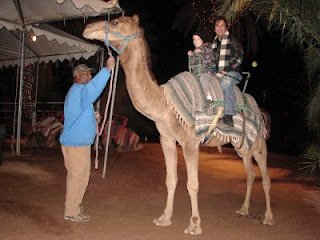 Those of you that are just discovering my blog will begin to notice that I'm not much for taking pictures. There was a time when I was taping Javin, my son in California, at some school function when he was little and I came to the realization that I was living life through the viewfinder. Watching the videos afterwards was never as satisfiying as the moment was. My memories of my dad are so much more 3 dimensional than any photos or video could ever be. The smell of Old Spice, his gestures and the feel of his skin. I wonder if my son Shaw will remember fondly my Drakkar Noir cologne in the coming decades. ?

Anyways, there aren't many images of our Christmas adventures because we were busy living them and not documenting them for the rest of you. I hope my words will paint a bit of a picture.

Some friends invited us to visit the Christmas lights display at the Phoenix Zoo last week. The company that handles all of the concessions at the zoo is a client of my friend and provided VIP passes 30 minutes before the unwashed masses and we got complimentary hot chocolate, popcorn, cotton candy, carousel rides and a free camel ride. It was a great night- even after the unwashed masses came in.

I DJ'd an event at Scottsdale Fashion Park in exchange for a shopping spree. I got myself a very expensive pair of jeans and a nice dinner jacket that I would not have otherwise spent that kind of money on. I also spent about $400 of my spree on some socks and underwear which I donated to a local cause. I know the economy is tough but I can hardly fathom that there are people in Mesa Arizona- a city of great wealth- who don't have socks and underwear. There was a school nurse who was aware of some needs but because of the bureaucracy of her place of employment was not allowed to do anything about it. I just took her passing comment on the subject and ran with it. They were delivered discreetly and she wept. She had several dozen pairs of each size for boys through teens.

Christmas day was spent indoors and the rain made that seem ok. Often, a lazy day can seem wasteful but Christmas was just fine. Watched Kung Fu Panda, It's a Wonderful Life, and Back to the Future III. I just unhinged my jaw and shovelled in several plates of Christmas goodies.

My best customer is a really nice bridal boutique out in Goodyear called Thee Wedding Warehouse. They are having a weightloss thang next week and the winning bride wins a wedding dress. I am gonna participate with them but I told them that I didn't need the dress if I won. I'm 6 lbs over what I should be, and I'm about 16 lbs over what I want to be.

Posted by Curtis Whipple at 1:03 PM

I haven't been to the zoo lights for quite a while. They were ok, but I felt it was over-priced. That's cool that you got to go in before the masses.
I did go the the luminarias at the botanical gardens next door though. My friend called it "zoo lights for grown-ups".
I've got to say, I've never been on a camel. cool.