Wedding in the round

I've waited for some time after this wedding to post this.  I regret that I'm not a photographer- first, I don't have a great camera and second, I'm there to do DJ work and not take a bunch of pictures.  I try to snap a couple here and there to post interesting things as I see them. I've waited for some time because this particular wedding looked so much better in my mind and heart than my photo abilities could capture. 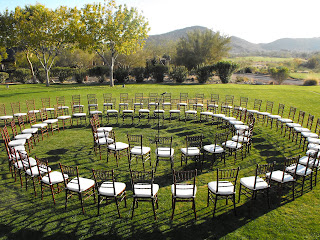 This photo was taken before all of the fresh flowers were placed on the chairs.  After the flowers were done, I was busy doing my work as a DJ and guests were arriving- no more time for snapshots.  I had seen this type of a set up on some wedding blogs and on pinterest but this was the first time I had seen it in practice.

People, individually, are pretty smart, but as a crowd, there seems to be a separate mentality and they need some direction.  Although everybody thought it was really charming, it completely tweaked their melons as to how to work it.  "OK, so where do we sit?"  "How do we get in?"  Even though I wasn't an usher or anything, I had to explain to several people that the 10 or 12 chairs at the center were reserved for the parents and the bridal party but other than that, they would just enter the spiral right there on the left and go in as far as they'd like and sit themselves down. When the ceremony started, it made so much more sense to them.  Everybody had a front row seat as the bride and her father made their way AROUND the aisle, not down the aisle...  It was a beautiful thing.  ﻿

Instead of a guest book, attendees were invited to write their good wishes on these tags and put them in the antique jewelry box. 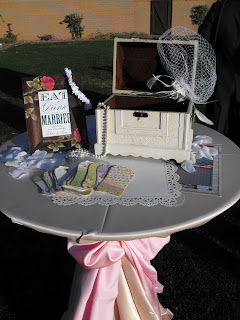 I express my regrets again that I'm not a great photographer- I couldn't have captured this young woman's beauty.

There are 'strata' of people.  There are those that are beautiful as measured by the standard of the the glamour magazines. There are those that are beautiful because of their humor, their kindness, their generosity...  there are some people that are rather 'homely'  Please don't take offense... I've often wondered too if my life in entertainment might have been different if I was a homely man perhaps?  At least I don't have a big goiter growing out of the side of my neck with a greasy eyeball sticking out of it or anything...

I've seen brides of all kinds over the years.  I am usually able to weed out most 'bridezillas' in the consultation process so my customers are mostly wonderful people.  I don't care how pretty or rich someone is, I won't put up with abuse.  This bride was not only charming and sweet but beautiful in the physical realm as well.  That said, I've seen some physically beautiful brides blow it with the wrong dress or with a bad make-up job by a friend or family member as opposed to a professional make-up artist.  I've seen others that were rather ordinary when I met them during a consultation but who really shined on wedding day with great hair, makeup and the right dress.

This was a Vera Wang gown and when I heard that she had altered it with a thing on the hip and some other adjustments, I thought she was crazy but when I saw it, I knew she was exactly right.  She chose the perfect dress, she changed it up slightly and made it her own, it was the perfect hair, the perfect make-up, the perfect veil.

To top it all off, she was/is just an absolute sweetheart. 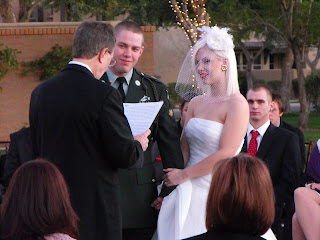 Posted by Curtis Whipple at 5:51 PM

I have read about this, but seeing it is beautiful. I wish you would write more often on your blog...what you write is interesting and very, very good. I especially loved the part about tweaked their melons...it is so apt.
Judy