I played a very posh event at a private residence in Scottsdale last night. It was a victory celebration/political fundraiser for David Smith of Arizona's District 7 which includes Cave Creek and parts of Scottsdale I think.

This is Tony Vacca on the sax. He just played a couple of numbers with an mp3 file on an ipod as accompaniment through my DJ system. He was too good for his own good I'm afraid. It was so perfectly mixed and performed that I don't think that most people realized they were listening to live sax unless they actually saw him standing there. Here's Sheriff Joe Arpaio speaking to the crowd with David Smith on his left and event organizer Gia Heller on his right. My DJ booth is right behind them but I'm out taking this picture. 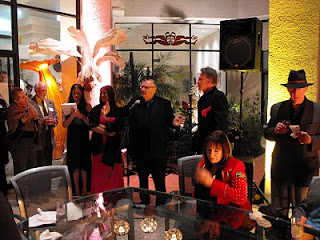 I'm over by my booth this time. Sheriff Joe and Mr. Smith. Personal friend and industrymate Lanette Romero- the Cake Contessa- catered the event and she whipped up some coconut shrimp with a delicious mango salsa- Mmm Mmm MMM! Local celebrity, Raven Valdez, was tending bar to raise more money for the cause of the evening and Barry Goldwater Jr. (former member of the U.S. House of Representatives) was also in attendance and gave a short speech. I also met LeAnn Hull who recently ran for the U.S. House of Representatives.
I was brought on mostly to provide the sound system for those couple of speeches and announcements but I can't just do the minimum- it's just not my nature. I fired up some dance music and asked the homeowner if I could move a patio table out of the way and we had some dancing and even went a half hour over. How could you not want to dance when you are all dressed up for dancing?
Posted by Curtis Whipple at 6:10 PM

Wow! I got to shake your hand this morning, the man who partied with the stars. Crazy. Sheriff Joe is one fearless dude. If I had a million dollar bounty on my head from the Mexican drug cartel, I don't think I'd leave my bunker!