If you haven't already done so, scroll down to Day 14 and work your way up.

This has been, unexpectedly, a profound experience overall.

I'm aware of family, neighborhood friends and industry friends and even some of my customers that are reading this and then sharing their personal insights when we cross paths or asking questions when we meet face to face. They are great insights that others reading could benefit from. Leave your comments here too. No lurking!

A few more observations since the last update: Trash output has been substantially reduced in recent weeks. The entire house is less than 1 kitchen trash bag per week now. The convenient processed microwave meals and stove top meals in a box and other such prepared foods are just not happening.

Side note regarding the trash: I bought some new road cases for some DJ equipment. The old cases were in fine working order but they were looking fairly ratty from several years on the road and I was feeling more and more self-conscious going into the nicest hotels and social clubs in Phoenix with my battle scarred equipment. They had earned their money and it was time to replace them. The new cases are tough ROAD CASES mind you, but they were shipped over the ROAD for two days from Kansas or something- A ROAD CASE inside of a cardboard box which was inside of another cardboard box! It was all recyclable but it was a huge pile of packaging- that came from trees- and it has be be dealt with now. Other than the irony of shipping a permanent road case inside of a temporary road case, the amount of trash it created seemed alarming to me relative to the otherwise diminished trash and recyclables in the rest of the house. 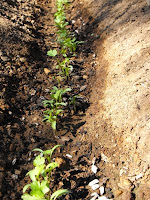 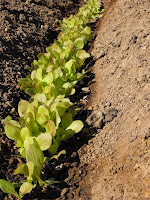 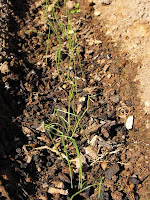 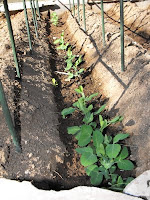 The garden is sprouting up nicely. Cilantro, Butterhead lettuce, onions and peas. The spinach didn't come up. I remembered that the seeds I planted from that bag last year also didn't sprout so I discarded the balance. I re-planted another variety of spinach from another seed packet and I'll report on that next week. The Simpson lettuce didn't sprout either. If this were a real crisis, it would have been deepened by these crop failures. I'm going to plant something else in that row tomorrow- another kind of lettuce or some cabbage. I know a few like minded people who also store goods against hard times, including seeds, who mistakenly think that you just go throw them in the ground and Wal-la! Food! It ain't that easy. (I don't need no English lessons either) I think it's good advice to grow a garden all the time. The food is fantastic and the skills may save your family. I've been doing it for several years and learning what works and what doesn't and how to care for things and protect them from fungus and pests etc.
The apples from Santa Fe are phenomenal! I haven't eaten apples in this quantity since I was a kid. Sliced up with some oatmeal in the morning. Dipped in peanut butter for lunch. A whole apple nibbled down to the core for an afternoon snack. Thank God for Red Delicious apples! Used the tomatoes to make some tomato sauce and some tomato soup. They were going to spoil otherwise. I hear some tomato soup with some crackers calling my name for dinner in a few days.

Prepared/processed meals are supposed to add to the convenience of our lives- It's a LIE! I've decided that they actually make it more complicated. Meals are far more simple now and easier to prepare this way. No trips to the store. The food staples that were purchased years ago were for pennies on the dollar relative to the expense of processed/packaged items. No packaging to contend with, no fillers, no modified food starch, which is a by-product of processed wheat and/or corn used to puff up portions or package weights. A bowl of chili con carne or franks and beans (still have about 2 dozen kosher franks in the freezer) or some dried black beans soaked over night and simmered in a crock pot all day streusselled with some good pepper sauce and served with some cornbread for a meal is just fine. Still have frozen chicken and frozen broccoli, frozen corn, dried potato flakes for mashed potatoes with a can of roast beef and gravy over the top. Dried hash browns whipped up and served with maybe a slice of fried spam for breakfast.

The cheese that was delivered by a friend- see earlier post for an explanation of that- is still a welcome treat, grated over a bowl of chili, but that is almost gone. It may last another 10 days or so.

I really miss fresh milk... Did I mention that before? There is a dairy in Southern California called Alta Dena that- for whatever reason- has the best milk EVER! There is nothing like a glass of cold milk and I mean COLD. Brad Pitt likes ice cubes in his milk, like I do, and that's because he is a Epicurean, like I am. I'm doing a DJ job in LA in a couple of weeks and would love to go drink a gallon of Alta Dena milk but it will have to wait until the next time I'm out there in January. Alas, the dried milk is just to weird to drink. There are two brands in storage. Neither is acceptable to me for drinking, but one is OK for cooking and baking, the other is acceptable on a bowl of cold cereal but I notice that it makes the cereal soggy VERY quickly. I guess there is some property in real milk that doesn't penetrate the structure of cold cereal as quickly. The dried milk acts like water on the cereal. I find myself pouring a shallow bowl twice and eating them quickly as opposed to a full bowl that goes soggy before I can eat it all.

It's nice that the weather has cooled. I find solace in a good cup of hot chocolate and marshmallows a couple of times a week for breakfast or a cup in the evening after dinner. Stephen's brand hot chocolate is Deeeee- LISH! I sip it and dream of the day when I can enjoy a glass of milk again.

Since moving to Arizona just over 3 years ago, I have been re-introduced to the concept of drinking plenty of water. I drink a good amount of water anyway, but I'm drinking even more of it lately and enjoying it and feeling generally better. I've always been a Koolaid fan when it's offered, but I just don't need it right now. I prefer water. I DO have lots of sugar and Koolaid stored.

Final observation for this week. The new pace and regard for food and meals is refreshing and meaningful. There is a very real social element to eating food. I wonder how much of the economy can be traced to ideas exchanged over a meal or a cup of coffee ending with a handshake and a new professional relationship that becomes profitable? I've been lingering at the table after dinner lately and shelling peanuts or pistachios and laughing and talking about things and connecting better. Whenever I eat Asian food, I always use chopsticks. I'm pretty adept at the use of chopsticks but even at its best, the bites are slower and smaller. It just slows you down to enjoy the meal. More meals should use chopsticks.

In a similar way, shelling peanuts and pistachios just slows you down. The simple act of eating a simple meal, when done correctly, can BOND you to loved ones.
Posted by Curtis Whipple at 9:22 AM